States with the Highest (and Lowest) STD Rates

STDs have reached an all-time high in America and over 2.5 million new cases

With drugs and treatment available that have lengthened the lifespan of HIV positive patients, you hear less about STDs in the news than you did decades ago when an HIV positive result was the equivalent of a death sentence. Because of the declining media coverage, you might be tempted to conclude that STDs aren’t as common as they used to be.

You’d be wrong. According to the latest data from the CDC,  STDs have reached an all-time high in America and over 2.5 million new cases are reported each year. While STDs may have faded from the media and popular consciousness, they continue to inexorably rise in America.

The staff at AtHomeStdKit.com analyzed the most recent STD data from the CDC in order to calculate what states had the highest and lowest overall STD rates. We also performed this state-level analysis for four major sexually transmitted diseases: Chlamydia, Gonorrhea, HIV and Syphilis.

We found overall Alaska has the highest rate of STDs in the nation, while West Virginia has the lowest. This is primarily driven by Alaska’s very high Chlamydia rate (the most common STD among the four we looked at) and West Virginia's low rate for that disease. Gonorrhea is most common in Mississippi, which is 8 times more common than in Vermont, the state with the lowest rate. By a considerable margin, syphilis is most common in Nevada where it is almost 30 times more common than in Wyoming, the state with the lowest syphilis rate. Wyoming also has the lowest new HIV infection rate while Georgia has the highest rate in the nation.

Before diving into the results, it’s worth spending a moment on the data used for this analysis. We looked at two different data sets from the CDC in 2018, which is the most recent data available. First, for the diseases of chlamydia, gonorrhea, and syphilis, we looked at the number of reports of new cases received by the CDC in that year. For HIV, we looked at the new diagnosis rate for 2017, as reported here by state. For all results, we look at the rate of cases per 100,000 people living in the state to calculate the “per-capita rate” of STDs in each location.

To provide some context, just how prevalent are each of these STDs we are discussing? The chart shows the rate of new reports per 100,000 people in the United States: 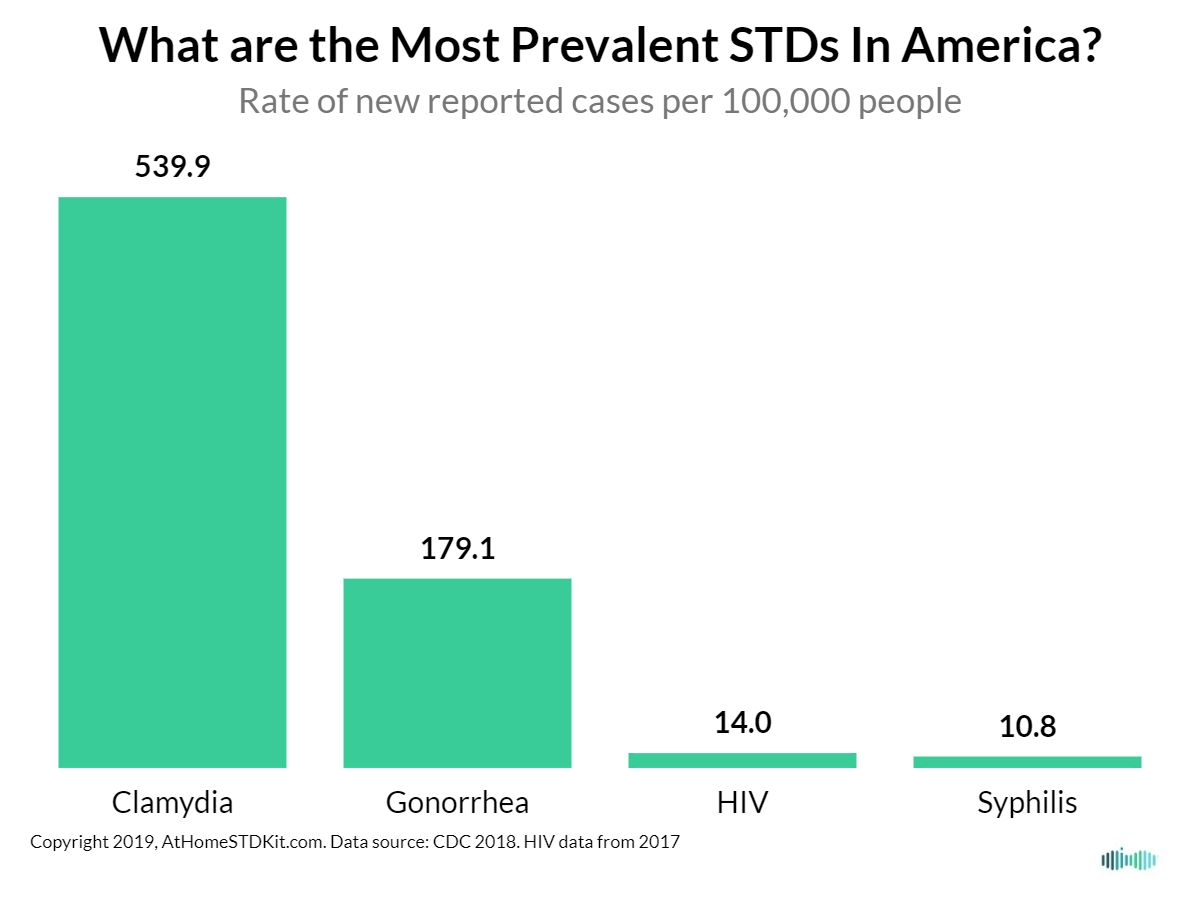 Among these major STDs tracked by the CDC, chlamydia is by far the most common. Nearly 540 people out of 100,000 report a case of chlamydia each year. This is more than twice as much as the reported cases of gonorrhea, HIV, syphilis combined. With the exception of HIV, these diseases can be cured, but catching them early is critical for minimizing their damage.

So which places in America have the highest and lowest rates of STDs? The chart below shows the newly reported cases per capita by state for all four of these diseases combined: 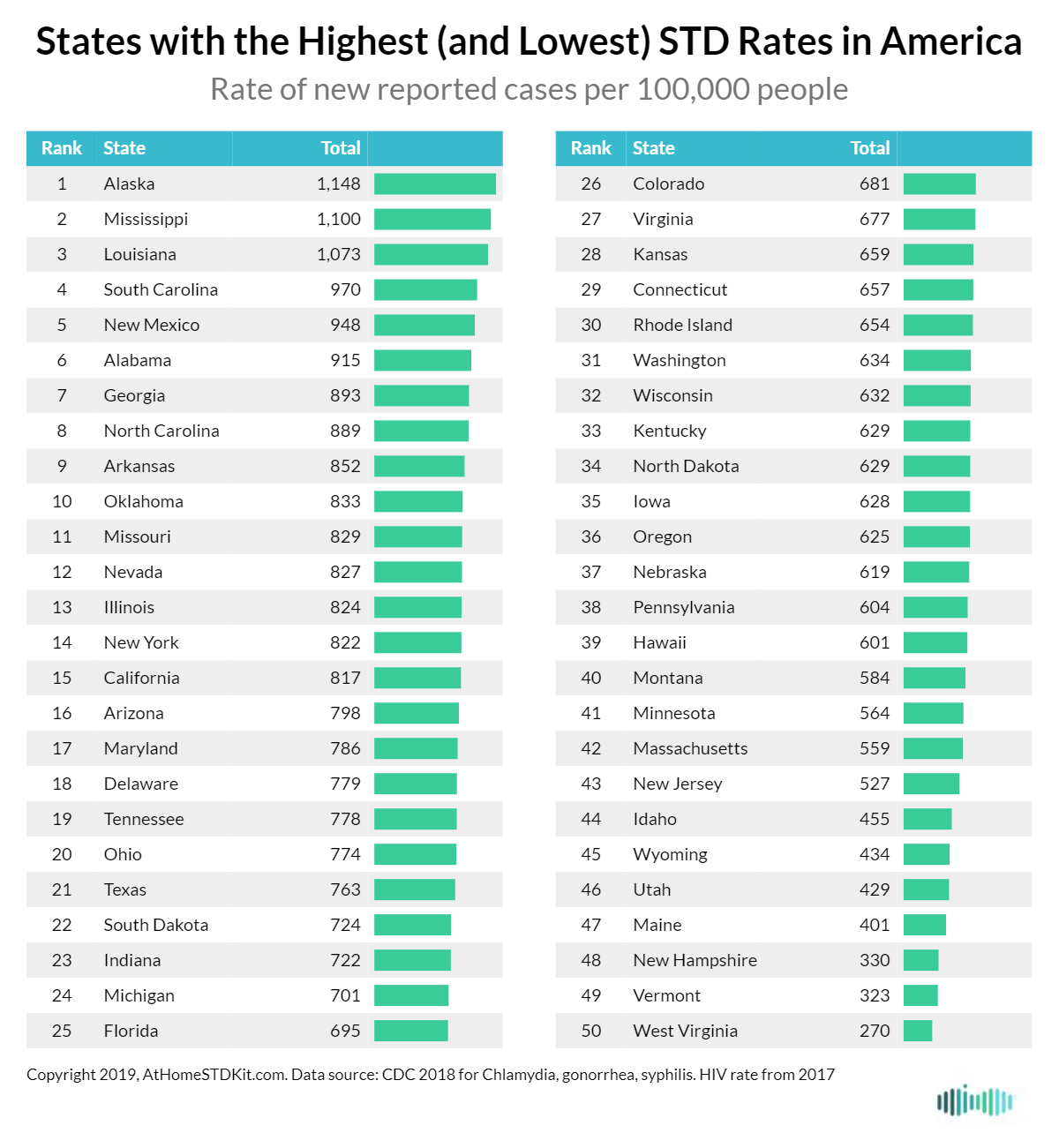 STD rates vary considerably depending on where you are in America. Alaska, Mississippi, and Louisiana have the highest STD rates in the nation with over 1,000 people out of 100,000 reporting a new case each year. Put differently, that’s over 1% of the population.

On the other hand, STD rates in West Virginia, and New Hampshire are the lowest in the nation. In these locations, the STD rates are nearly three times lower than in the states with the highest rates.

What drives places like Alaska to have the highest STD rate in the nation and West Virginia to have the lowest one? Given that chlamydia is much more common than other diseases, it’s prevalence by state drives the overall averages. Below shows the chlamydia rate by state: 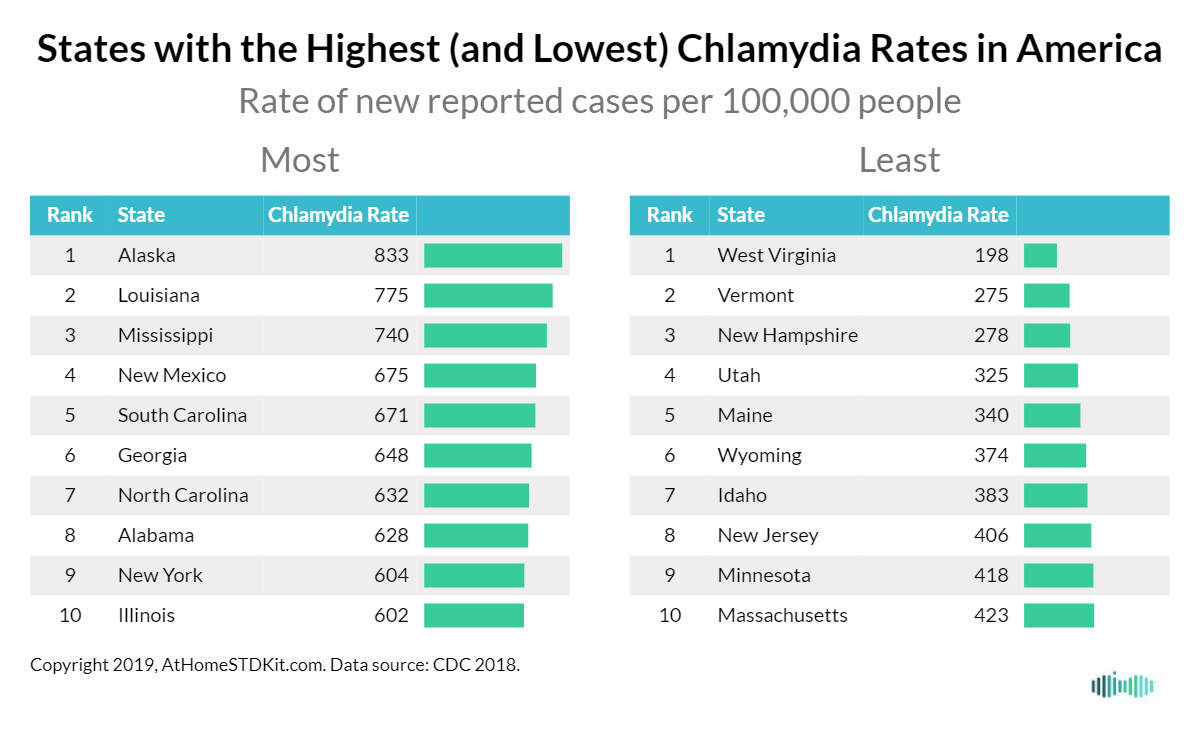 Next, let’s turn our attention to the second most common STD, gonorrhea: 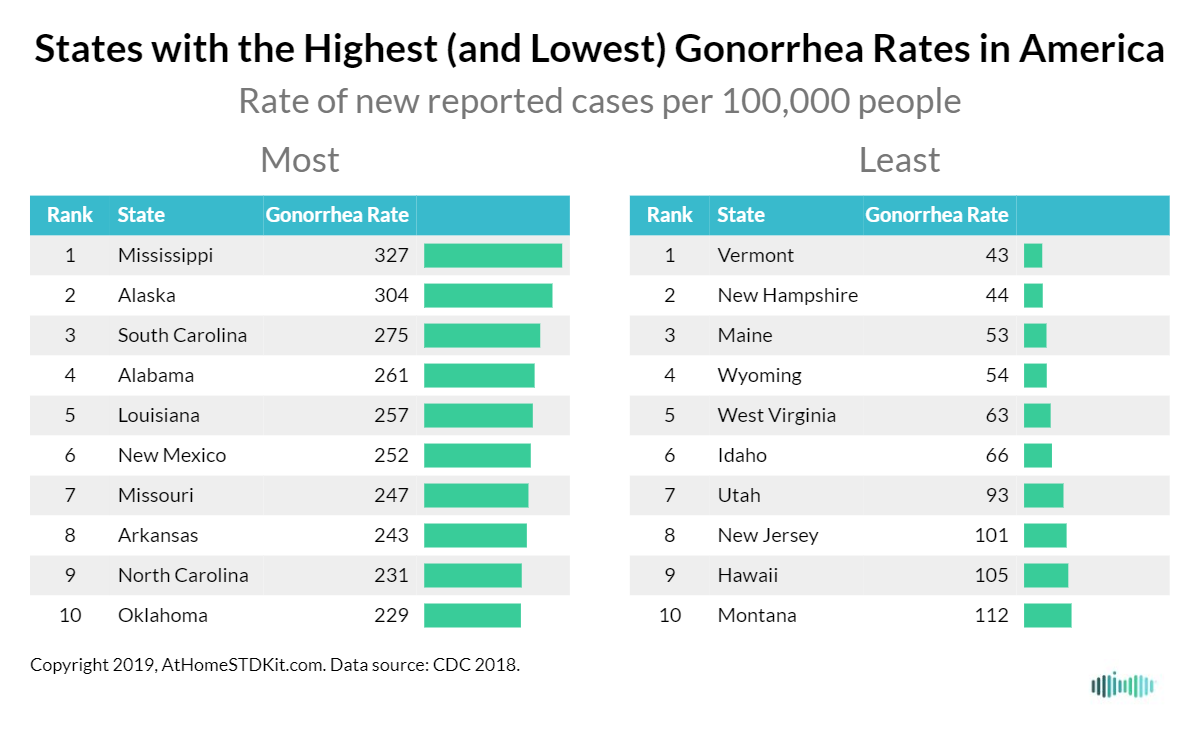 Mississippi, Alaska and South Carolina top the nation when it comes to the rate of new gonorrhea, chlamydia, and overall STD infections. The gonorrhea infection rate is nearly 8 times higher in Mississippi than in Vermont, the state with the lowest rate.  Across the country, there is an enormous spread in the probability of gonorrhea infection depending on where you live.

While HIV is much less common than chlamydia or gonorrhea, there is no cure. And while advances in medicine mean that HIV patients can live into their seventies, the life span of those with HIV is still much lower than those without the disease.

Where are new HIV infections most common in America? The following chart shows the per capita rate by state: 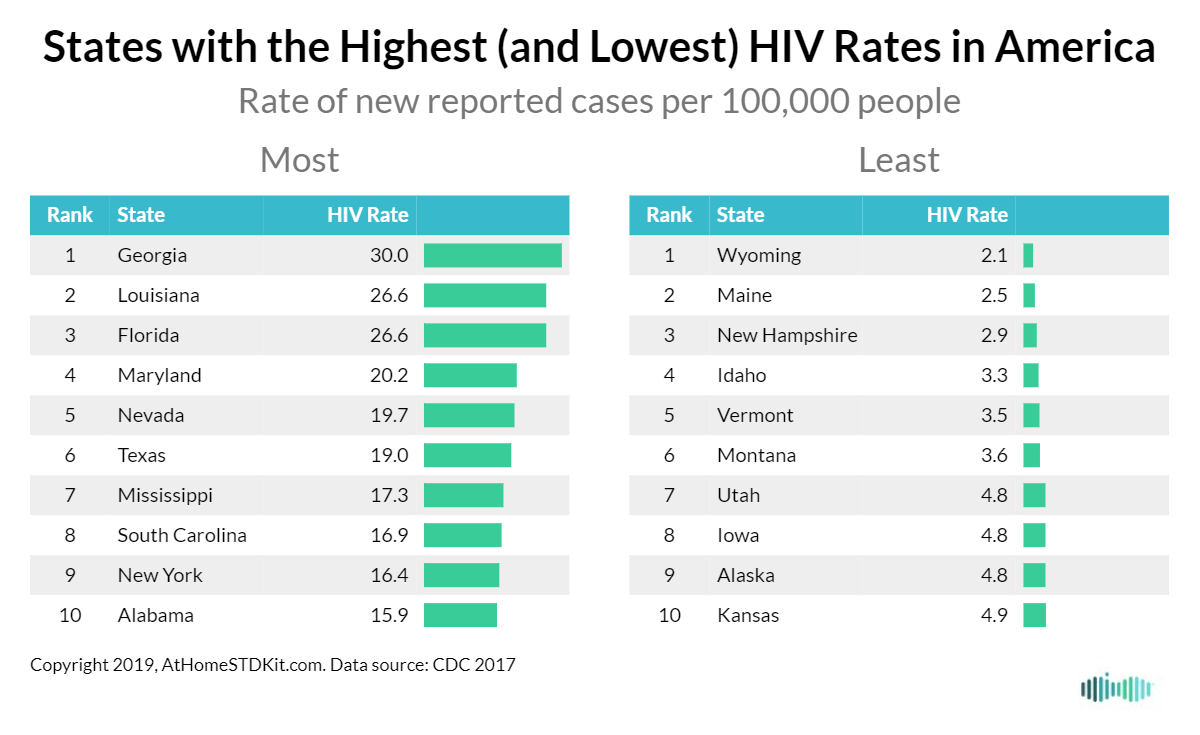 Georgia has the highest new infection rate of HIV in the country, with 30 people per capita reporting the disease. Louisiana (a state that also ranks in the top three for chlamydia and gonorrhea) ranks second when it comes to HIV infections. The states where HIV infections are much less common are all states with mostly rural environments.

Lastly, let’s examine the syphilis rate. Compared to the other three diseases we’ve looked at so far, syphilis is the least common. However, it can have very serious effects if not detected and treated early. 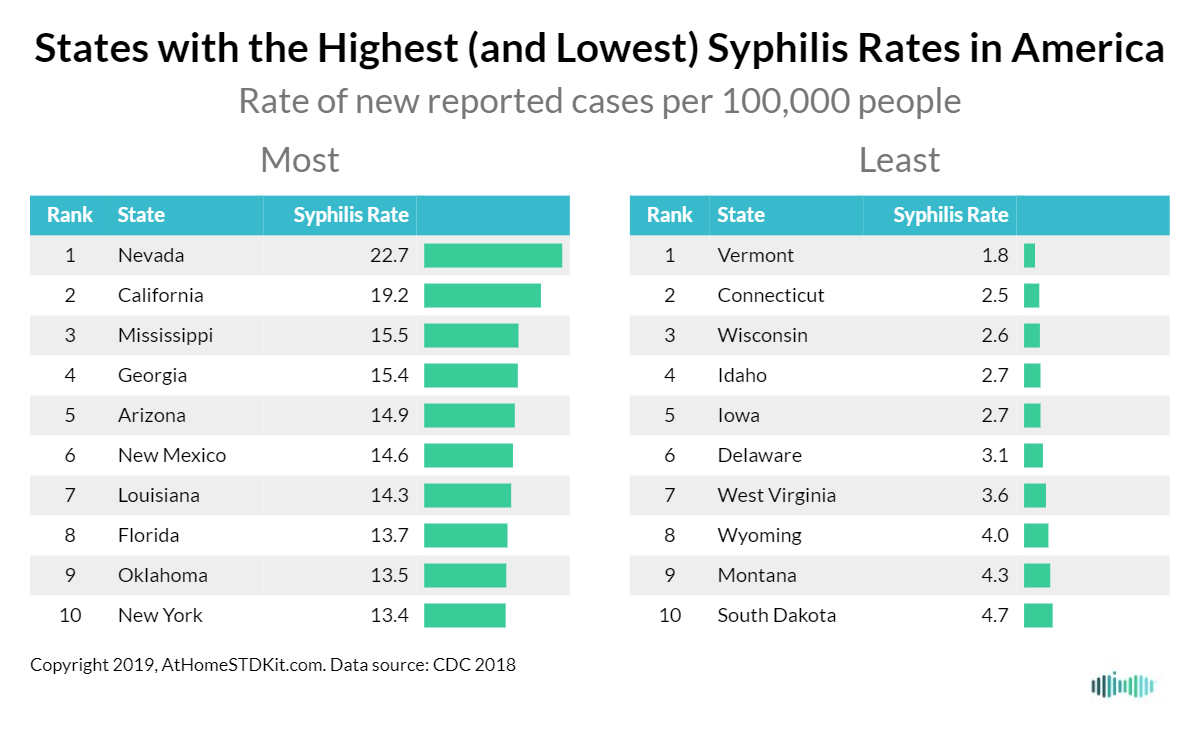 In the United States, there is an enormous variance in the prevalence of STDs by location. For some diseases, an STD can be more 10 times more likely in one state than another. Overall, places like Alaska, Mississippi, and Louisiana have the highest STD rates, while West Virginia, Vermont and New Hampshire have the lowest. Given that sexually transmitted diseases are by definition locally transmitted, perhaps it shouldn’t be too surprising that their prevalence is closely associated with geography.

Narrow Your Search by State

Reviewed By AtHomeSTDKit.com on November 5, 2019