Fishy smelling discharge and the conditions that most frequently cause it.

The vagina, like many other parts of the body, has its own unique scent. In most cases, this scent is perfectly normal and natural, but if your vagina’s scent has recently changed or you detect a particularly foul-smelling or pungent odor, you may be dealing with some kind of infection.

Many different factors play into creating your vagina’s normal scent, including your lifestyle, health and diet, but if your vagina is producing discharge with a distinct fishy odor, one of two common infections is the most likely culprit — bacterial vaginosis and trichomoniasis, or trich.

Learn the truth about fishy smelling discharge and the conditions that most frequently cause it.

Bacterial vaginosis, according to the Centers for Disease Control and Prevention, is the most common cause of vaginal discharge and related symptoms for younger women who may be more likely to have multiple sexual partners.

BV isn’t a foreign infection; rather, it’s a condition caused by an imbalance of bacteria within the vagina. The precise cause isn’t well-understood by researchers, but introducing new sexual partners is believed to upset the bacterial balance in many women. When a new sexual partner is introduced, the unique chemistry of that person’s genitals, fingers or other parts of the body mix with the vagina’s pH balance. This disruption can lead to an overgrowth of bacteria, often Gardnerella vaginalis, the most common bacteria in the vagina.

It’s estimated that nearly one-third of women between the ages of 14 and 49 have BV, but only about 15% of women with the infection have symptoms. For those whose bodies do show obvious signs of infection, a thin vaginal discharge is the most common symptom. This discharge is sometimes white, gray or green in color, may have a foamy consistency and carries a strong fishy odor that is more noticeable after sex. Some people may also experience burning or itching during urination.

Bacterial vaginosis can usually be cured easily with a course of antibiotics, and BV sometimes will go away without any treatment. For people whose bodies show obvious symptoms, the most commonly recommended course of treatment is one of three antibiotics — metronidazole as a pill or a gel or clindamycin cream. Treatment is generally not recommended for male partners of people with BV, but the bacteria may be transmitted between female partners. BV is connected to higher rates of HIV and other STDs, and BV has been linked to a potentially serious reproductive disorder, pelvic inflammatory disease, or PID.

BV is a notoriously recurrent issue for many women, and some research indicates that the use of probiotics may help prevent BV in women who are prone to it. Other prevention methods include the use of condoms and dental dams, as the cause of BV is believed to be the introduction of new body chemistry from sexual partners.

Trichomoniasis, often called trich (pronounced “trick”), is a common sexually transmitted disease caused by a parasite called Trichomonas vaginalis. Trich is the most common curable STD, and an estimated 3.7 million Americans are currently infected with it.

Trich is spread from partner to partner through contact with infected bodily fluids, including semen and vaginal fluids. In men, the trich parasite usually infects the urethra, and in women, trich can invade the vagina, vulva, cervix or urethra. In rare cases, trich can infect the eyes or anus.

The infection is more common in women than men, but as many as 70% of people are unaware they have it because their bodies show no obvious signs of infection. For those whose bodies do show symptoms, the most common signs are itching and irritation of the genitals, burning during urination, penile discharge and unusual vaginal discharge that includes a fishy smell and is clear, white, yellow or green in color.

Trich is usually easily treated with antibiotics, most often metronidazole or tinidazole, and usually just one dose is all that’s required. However, because trich is easily spread during sex and can infect both men and women, it’s important for sexual partners to get tested and treated. Untreated trich is connected to low birth weight and preterm delivery for pregnant women, and people with trich have an increased risk of contracting HIV and other STDs.

Recurrence of trich is very common, and about 1 in 5 people are reinfected within a few months of receiving treatment, so it’s important to take steps to prevent the infection in the first place. This includes being sure to use safer sex practices, such as the use of condoms and dental dams during every sexual encounter. Trich also can spread during vulva-to-vulva sexual contact and through the sharing of sex toys.

Other Causes of Vaginal Discharge & Odors

Infections related to unprotected sex are far from the only causes of potentially disturbing vaginal discharge or odors. While BV and trich are the most common culprits when it comes to a strong fishy odor and discolored discharge, other causes of vaginal discharge include:

Most of the time, vaginal discharge and odor is nothing to be concerned about. But if you notice discharge or smell that is not normal for you, it’s important to visit your healthcare provider. In most cases, infections related to fishy-smelling vaginal discharge are easily treated and cured. 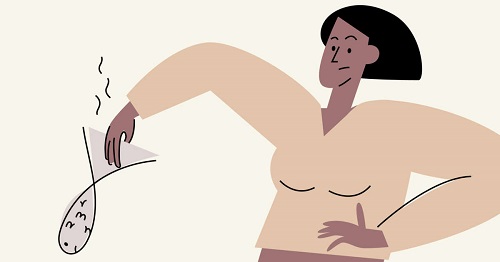